From Review or Discard at Will
Jump to: navigation, search

What's it all about?

MissieD is a performance hardware and software piece with Microsoft Kinect, wooden "Mystery Box" containing a Parallax propeller and servo whose purpose is to represent the concept of misdirection in magic or a feint in fencing utilizing software and hardware. It's my representation of how I feel the media and the 1% attempt to deflect us from issues of importance. </soapBox> And I learned a lot of new code which was also my intent. This project is trying to get back in my actually doing queue. hey Looks like I found some time in May of 2013. See the menu/index for the update section. I have an Azure website for the project now too. With a simple asp.net MVC 4 located at http://missied.azurewebsites.net

In the MissieD Kinect screen the upper left is the video stream from the Kinect. Lower left is a .jpg capture of the moment the Mystery Box toggle switch is being turned back off by the hand in the Mystery Box. Upper right the depth map and lower right a status logging window.And a screen capture of the image gallery created during a LA Startup Nights event at CoLoft in Santa Monica, Ca. ‎ {{#ev:youtube|W6nViLHnNd4}} This is a hand held movie capturing the Myster Box in action with the Kinect application, MissieD, and the author 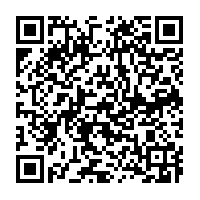 Plan to add QR code in Gallery Display so folks can locate their picture. Possibly upload to a web site where they can view, tag and download the picture. 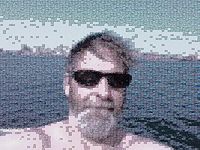 Photo Mosaic on my Avatar from camera and cell phone

After a performance all the pictures would be used to create a photo mosaic of the performance logo or title.

Wow I submitted a pull request that was accepted as an Azure code sample in the MyPictures sample. (my first contribution to an OpenSource project) Looks like it's been retired it's an old SDK, but here is my repository in my own GitHub repository jhalbrecht/MyPictures

I have these included to give a visual idea of what I'm trying to accomplish. Ideally the performance logo would be more of a square with some color. There would be many more input tiles to work with. There were < 100 in this on and 95% of them were of me working on the project.

I used AndreaMosaic to create these mock ups. I hope to create the photo mosaic from the application in the future.

Getting to work on some of those 'future enhancements' I've upgraded the project to Kinect SDK 1.7 and WPF 4.5. I also created an Azure web site with blob storage, based on their MyPicture sample on GitHub. This WPF test client uses a fileChoser to locate an image, then upload to a Web Api on hosted Azure. Success response code contains the url to the image which is encoded into a QrCode using the CodePlex project QrCode.Net. The Windows phone Nokia Lumia 920 is displaying the image that was uploaded as read from the QrCode! :-) neat. 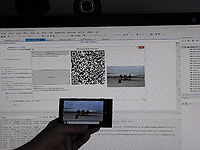 Azure upload and QrCode proof of concept
Retrieved from "https://wiki.rodaw.com/w/index.php?title=MissieD&oldid=720"